Here is an abbreviated version of the history of the Cahaba Project in Trussville, Alabama.

The property on which a blast furnace was in Trussville – near the site of present-day Cahaba Elementary School – was sold in 1935 to Birmingham Homestead Incorporated, a Federal Housing Administration project. In the time the furnace was idle, the site served as a prison camp, called Jefferson County Camp No. 3.

During the Great Depression years, the federal government attempted to relieve many citizens in the low-income bracket. The idea of developing homesteads with a moderate amount of acreage was considered and later pursued throughout the United States. In Jefferson County, a committee of prominent local citizens including Robert Jemison Jr., Charles F. DeBardeleben and J.F. Lies selected a site in Trussville in plain view of the slagheap from the dismantled furnace, giving the homestead project the name “Slagheap Village,” later to be known as “Cahaba Village” and “The Project.”

Senator John H. Bankhead and Dr. M.L. Wilson accompanied the trio on its inspection trip to Trussville, where it became apparent that the property would not be suitable for a homestead development. Resettlement Administrator Dr. Rexford Tugwell came to the area on an inspection trip. The area included 30 houses for whites and 40 houses for blacks, part of the housing formerly connected to the furnace. Tugwell and his associates decided to provide homes in the area not for homestead operation or for victims of the Great Depression, but for a quality suburban residential development. Being tired of fancy names for these developments, Tugwell declared the project to be called “Slagheap Village,” since a mountain of slag from the furnace was still visible. It was later called “Cahaba Village,” after the nearby Cahaba River.

At Tugwell’s suggestion, W.H. Kessler drew up the layout plans for the project and was from thereafter called “town planner.” Cahaba Village consisted of 287 residential units — 243 homes and 44 duplex units, constructed from 1936 to 1938 at an overall cost of $2,661,981.26. The total cost included work on public utilities, streets, curbs, gutters and public buildings comprising the high school, community building and co-operative store. The acreage cost was not included. Skirting the housing development was a green stretch of properties designated as park areas to protect the encroachment of any development that may detract from the beauty of the community. The properties took two years to construct and were opened in April 1938. A waterworks, sewage disposal plant, paved and lighted streets, and some sidewalks were provided.

The Cahaba Association was formed in June 1938. Rental rates ranged from $14 to $23 per month beginning June 1, 1939. The new community manager, A.C. Hester, was introduced at the Nov. 9, 1942, association meeting. He explained the transfer of the project from the Farm Security Administration to the Federal Public Housing Authority, family selection and family transfers. Hester stated the following:

Hester explained at the March 9, 1944 meeting the plan of the Federal Public Housing Authority to defederalize the handling of the project by June 30. The Co-op Association stated that it was possible for the community to purchase inventory at cost from the housing authority and be debt free of the government. Hester suggested the board and some other Co-op Association members be a committee to consider this seriously and meet with the housing authority and work out the plan of carrying out the suggestion.

In a letter dated July 15, 1946, it was stated that the Cahaba Project would be disposed of on or before April 1, 1947. “The plan for distribution is in progress of formulation but none of the details of the plan have been announced by Washington,” the letter states. According to the letter, it was the government’s policy to give every residential tenant, provided the tenant met eligibility requirements for homestead occupancy at the time of admission, the first opportunity to purchase his dwelling. The prices reflected normal market value, but a substantial down payment would be required.

At the Aug. 22, 1946 Cahaba Community Association meeting, pros and cons of incorporation of Cahaba alone, and also of including Trussville, was discussed. It was suggested that the people of Trussville advise the government that they desired to be included in the corporate limits. All who attended this meeting were requested to contact 10 or 12 of their neighbors, explain the proposed plan, and report back at an executive committee meeting on Aug. 30, 1946.

At that meeting, feedback was given, and it was reported that 45 of 50 Trussville residents were in favor and that five of nine Roper Hill residents favored incorporation. According to the Oct. 8, 1946 annual report of the Liaison Committee of the Cahaba Community Association, there was a joint committee meeting on Sept. 24, 1946, between Cahaba and Trussville representatives. It was unanimously agreed that the incorporated municipality should include both Cahaba and Trussville. A.C. Hester, the community manager, stated at this meeting that he had advised the Cahaba Executive Committee that the government would defray the expense of incorporating the government property, and that he felt certain that the government would be agreeable to extending the corporate limits to include a part of Trussville, provided it was shown that this was the will of the Trussville residents. A Trussville representative, Horace Norell, was then instructed to write to Hester, requesting that a portion of Trussville be included in the incorporated municipality.

A March 11, 1947, letter from the Federal Public Housing Authority briefly outlines the proposed incorporation of the town of Trussville. The letter states that the Cahaba Project is a fine example of planning for semi-subsistence homes that would be protected from the uncontrolled growth of its neighbor, Trussville.

The letter recommended that both sides of the Cahaba River be dedicated as park lands, as well as The Mall and triangular area near present-day Brentwood Avenue. The grassy area between Magnolia Court and Hewitt Street was also recommended to be kept as park land, and also as parking for a nearby church. The letter goes on to say that the housing authority was fully aware of Trussville’s process of incorporation. The letter acknowledges that Trussville proposed to incorporate as a town according to law, setting up a mayor and commission, and then revising the setup so as to have a city or town manager type of government.

At the April 8, 1947 Cahaba Community Association meeting, Henry Rogers, chairman of the Survey Committee, explained the work his committee had done toward the purchase of the Cahaba homes. He explained the terms of 14 loan companies that answered a questionnaire sent to them by his committee, concerning their terms of obtaining various types of loans. Charts containing all interest rates and fees based on a $4,000 loan were handed out to all association members. Rogers assured the association that by cooperating, the community could greatly reduce the cost of handling the loans. Hester reported that the Federal Public Housing Authority was working earnestly toward the sale of the homes, and that the authority wanted Cahaba residents to obtain the best possible loans with the best interest rates. Hester said that no prices would be set nor homes sold until June 1, 1947. He explained that alleys and green belts would be added to lots adjoining, and that parks and vacant lots would be dedicated to the municipality by the government.

In a May 1, 1947 letter from Rowland Long, Horace Norrell and Alton Williams to Arthur Taylor, who was assistant director for real estate and disposition for the Federal Public Housing Authority, plots of land were listed that the community wanted dedicated to the city of Trussville upon incorporation. “We have observed the growth of communities such as ours and have noticed the many times that the city fathers have erred in not allocating sufficient space for parks and playgrounds,” the letter states. “We anticipate a healthy growth in this community and hope to avoid some of these mistakes by giving much forethought and long range planning.”

A Timeline of Cahaba Project Events 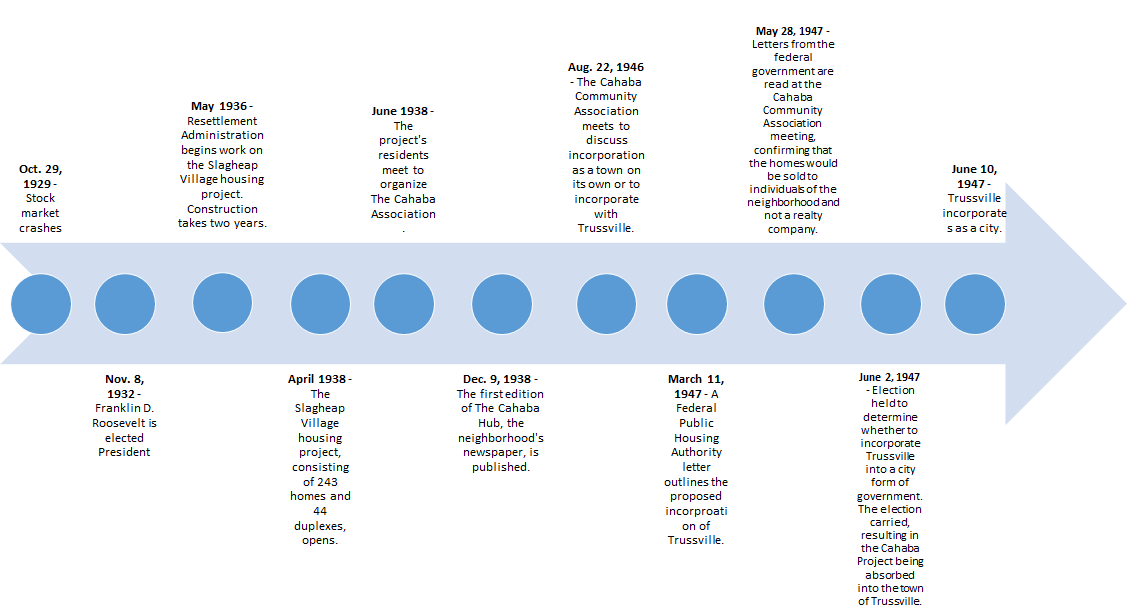